On Productivity, Diversification And Engineering - Or Why Engineering Jobs Might Be Endangered By Machines

Many economists seem to believe that productivity increases come from the automation of jobs "in the middle", which has led to both a higher demand for low and high skilled labor. For example, David H. Autor and David Dorn recently wrote an article in the NYT, which is based on that believe. They argue that people performing "abstract tasks that require problem-solving, intuition, persuasion and creativity", working in professions like "law, medicine, science, engineering, advertising and design" "benefit from computers". Let me focus on engineering and design and show that these assumptions do not show the whole picture. Also, I will focus on only one industry: automotive

When looking at the history of cars we see that very early on jobs that demanded high manual skills were broken down into smaller less demanding tasks. The introduction of the assembly line reduced the skill sets needed by every single worker significantly. Before this invention workers needed to be knowledgeable in several fields, and needed quite an understanding of the final product, afterwards they had to be good at a few reppetitive manual tasks.

Additionally, advances in numeric control had - in the 1970ies - made it possible to build machines, which were more precise and also faster than e.g. lathe operators, when it came to mass production. So, from then on many jobs  middle skill" started to disappear. Today, it is not only cheaper to use a CNC-milling machine (computer numerical control) for prototypes, the machines are also able to produce more complex parts than even the best worker could.

This is the part of the story that both economists have based their assumptions on. Of course there is much more; and technology did not stop progressing in the 1980ies. At the same time that CNC became a significant factor in production, computer aided design (CAD) also started to play an increasingly improtant role. For the most part of the last century, the workplace of design engineers looked like this: 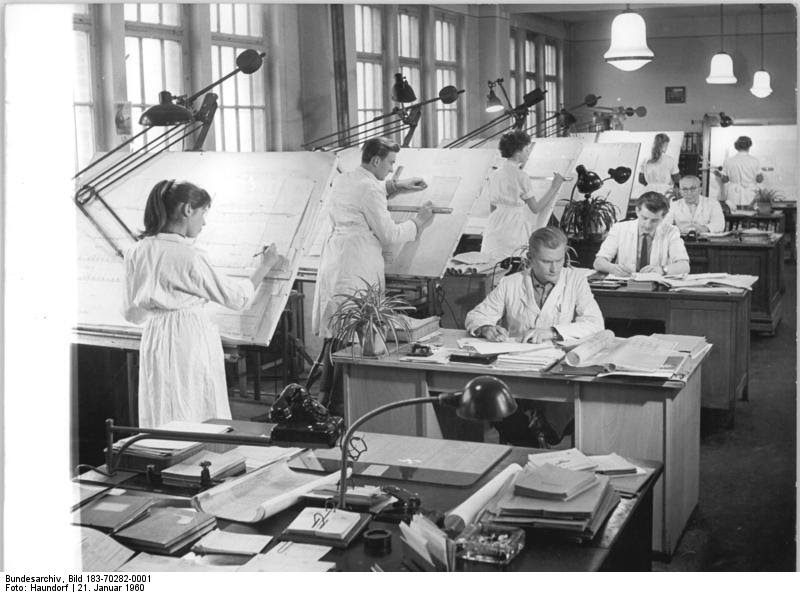 
One of the most important pieces of equipment was a razor blade, which allowed to correct mistakes, well, at least sometimes. Today, CAD programs like Catia V5 (video) have significantly reduced the amount of work that is needed to make the design drawing. In fact, the general assembly drawing, which both needed a lot of time and skill on a drawing board, can now be finished in a short time, once every part is designed and connected. Especially, cutaway views which demanded high visual thinking skills and alot time are now just a few clicks away. Parametrization allows to design several versions at once. The 3D model can be used for the CNC machine, significantly reducing the time needed to program it. So, automation affects engineering just as much as lathe operators. The assumption that

has nothing to do with the picture we are seeing in 2013. In fact computers excel at turning "non-routine" jobs into tasks much easier accomplished to be later completely taken over by the machines. Digital plant programs like RobCAD  (video) simulate all robots in a factory. Yes, currently programming them is still needed, but the task has become much more routine. In fact, once the computer "knows" all objects and their position in a factory, it will then become able to accomplish the task of programming many of the needed robot movements itself in the future. Through doing simulation runs it will in the end become better at it than a person. By the end of this decade computers will have turned one of the most "non-routine" jobs - setting up a new production line - into something very routine. Yes, engineers will still be needed, but much of the programming will be done by the machines themselves.

Of course, there is also test engineering, but this field has been and will be much more affected by computers than one would expect at first glance. The finite element method (FEM) plays not only a significant role in computational engineering but also affects the amount of experiments needed and the design process. The much increased computation speed makes finer and therefore more precise meshes possible, and the easier to handle simulation programs reduce the amount of time needed for the design of the models, which use the parts designed in CAD programs. Crash and wind tunnel tests are already being simulated to decrease both the design work and the number of tests needed. In a few years time it will be e.g. possible to simulate the texture evolution and resulting properties of steel while the material is being rolled, thereby making many test engineer jobs redundant. And tests themselves already need much less time to interpret since computers now automatically show the computed and therefore relevant result.

Looking at the art side, we also see a very similar development. In fact programs like Cinema 4D (video) are being used, and even though clay models are also very much needed to get a feeling for how the cars will look, most of the work on the models is now also done with CNC mills (here both manual and machine can be seen, large 5 axis mill - videos), though there is still some manual labor involved. The design can then be directly used by the engineers, and programs like Catia also offer geometric modelling options, which can be used by artists.

All this and more has led to less engineers and designers and also time being needed to design a new car, and the trend will continue.  But, why - one might ask - does Germany have a problem because it has too few and not too many engineers? Shouldn't we be observing massive productivity increases? Well, these increases are there, but they do not show directly in money, and therefore cannot be observed by economists. BMW, for example, today produces far more models than the beginning of the 90ies . In two years all numbers from 1 to 7 will be used for different cars plus X1,3,5,6 Z2,4 a minivan, and additionally i3 and i8. Let's also not forget about Mini where we also see different models (R55-61), and since that is still not enough: a few Rolls Royce, and motorbikes. The productivity increase of engineers and designers is leading to a product diversification at the moment, hence it remains hidden from methods used by economists.

This diversification can also be observed when looking at engines or transmissions. For the latter it has already become a battle against diminishing marginal utility. ZF has announced a automatic transmission with nine gears. Every added gear has less utility; and it does not seem very plausible that the 9th gear is something which will have a significant benefit over the 8th. But it has been designed anyway.

Today, a model will be replaced after about 8 years and one facelift will be done after around four years. Compared to Hitler's Kraft durch Freude Wagen, which Rommel used in Africa VW's Beetle which was produced until 2003 (in Germany from 1946 until 1978), one can easily see why the number of engineers needed hasn't fallen even though their productivity increased strongly. It is safe to assume, that the current trend by almost all companies to try to fill every single niche with at least two cars will not continue forever.

One should also not forget that there are a lot of car manufacturers with even more brands. VW alone has Skoda, SEAT, Porsche, Audi, Lamborghini, Bentley, (Bugatti). This might just inflate the number of engineers even though they are working on kits from which all cars of the same size are derived from.